The relationship between word and image throughout history is interconnected with the evolution of literary technologies and the changing roles and audiences of literature. Shifting trends in illustration styles and functions can be mapped through the archive, beginning from the illuminated manuscript and religious codices, one of the earliest forms of illustration, to photographs and graphics in the modern book.

The Lindisfarne Gospels, from the late 7th century is a quintessential example of how illustration was first employed in codices, as “illuminations” of religious texts. Before each gospel, a “miniature” appears of the writer of the following chapter. 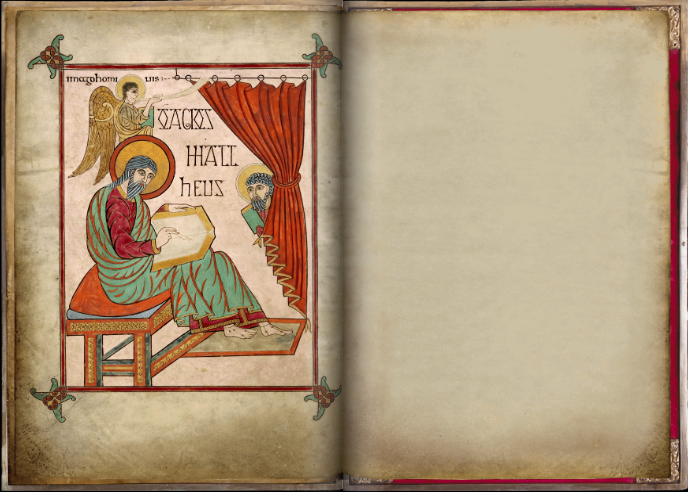 Focusing on the above pages, which show a portrait of St. Matthew that precedes his gospel, we see a hand painted, stylized painting with a decorative border. According to Bonnie Mak in Architectures of the Page, “the inclusion of more images in religious books of the later Middle Ages has been identified by scholars as an indication of the emergent practice of private devotion” (10). The inclusion of these portraits, offered on their own two-page spreads, with vibrant inks and metal foils sealed into the page, indicates a devotion to not only God, but to the writers themselves. The blank page separates the image from the text, and imparts a solemn importance in the illumination that is not afforded to other images in the gospel, “understood as [a] visual and cognitive [break]” (Mak, 10) wherein the reader can offer prayer to the saint. In many ways, these devotional images were of equal importance as the writing itself, especially for an expanding readership with varying levels of literacy.

Jumping ahead some eleven hundred years, reading audiences have grown drastically, and the art of codex illustration, while still bearing some vestigial resemblance to that of the illuminated manuscript, has evolved. Many 19th century works of fiction and satire, which were widely disseminated for large – albeit classed – audiences, featured caricature drawings throughout the text. 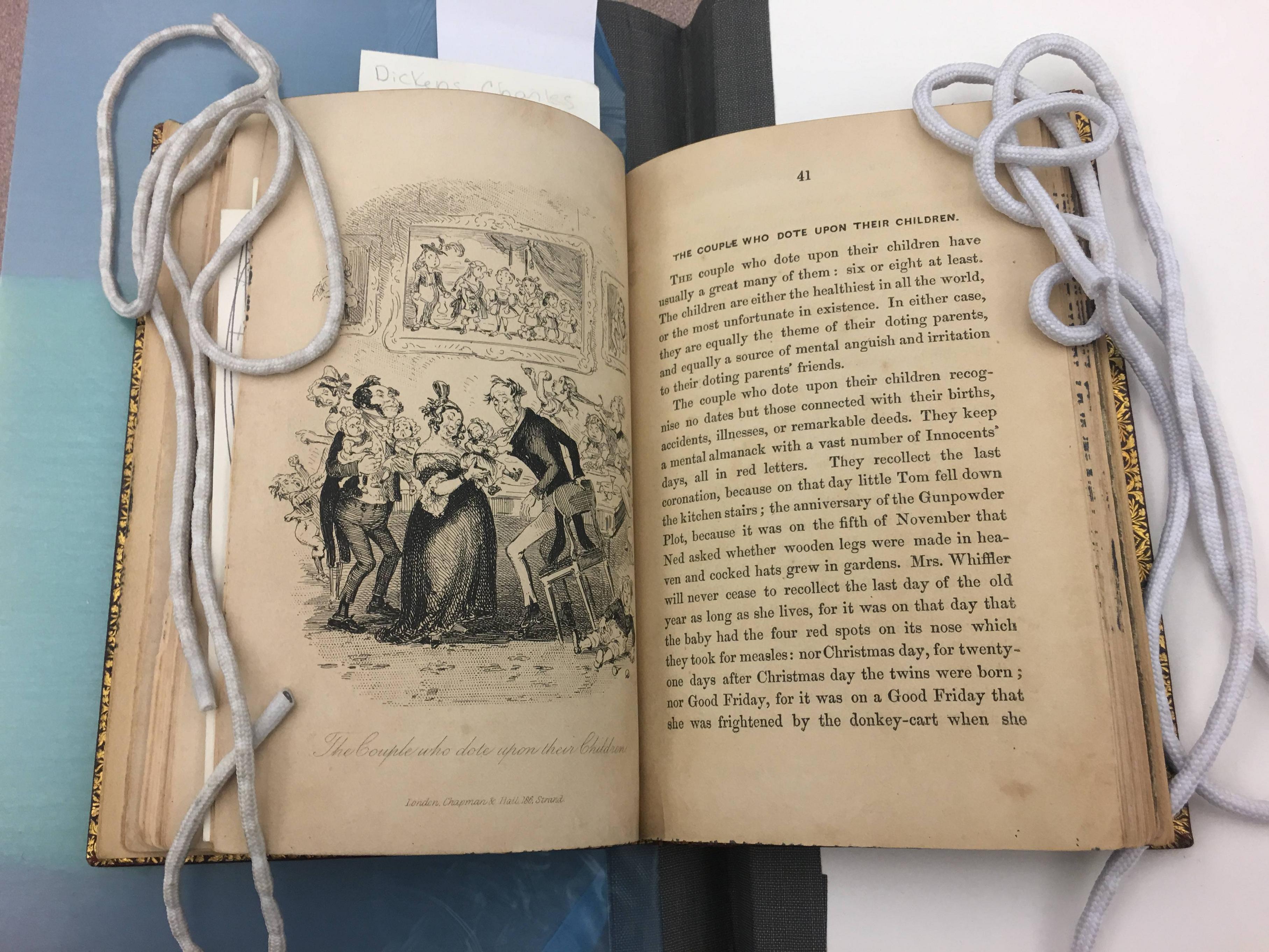 This work by Charles Dickens, called Sketches of Young Couples, features cartoonish illustrations to accompany the short, pseudo-journalistic prose that mock different types of couples. As with the medieval manuscript, the image is given an entire page, preceding the chapter to which it pertains, setting the tone for the passage that follows. Here, the image is black-and-white (probably for financial reasons as this book was for a popular audience and color prints would not have been feasible) but still highly stylized. And instead of the reverence demanded by the stoic miniatures of the Lindisfarne Gospels, these illustrations highlight the humor of the text.

Forty-seven years later, photojournalist Jacob Riis famously releases his work, How the Other Half Lives, which exposes the squalid working and living conditions of New York’s slums. 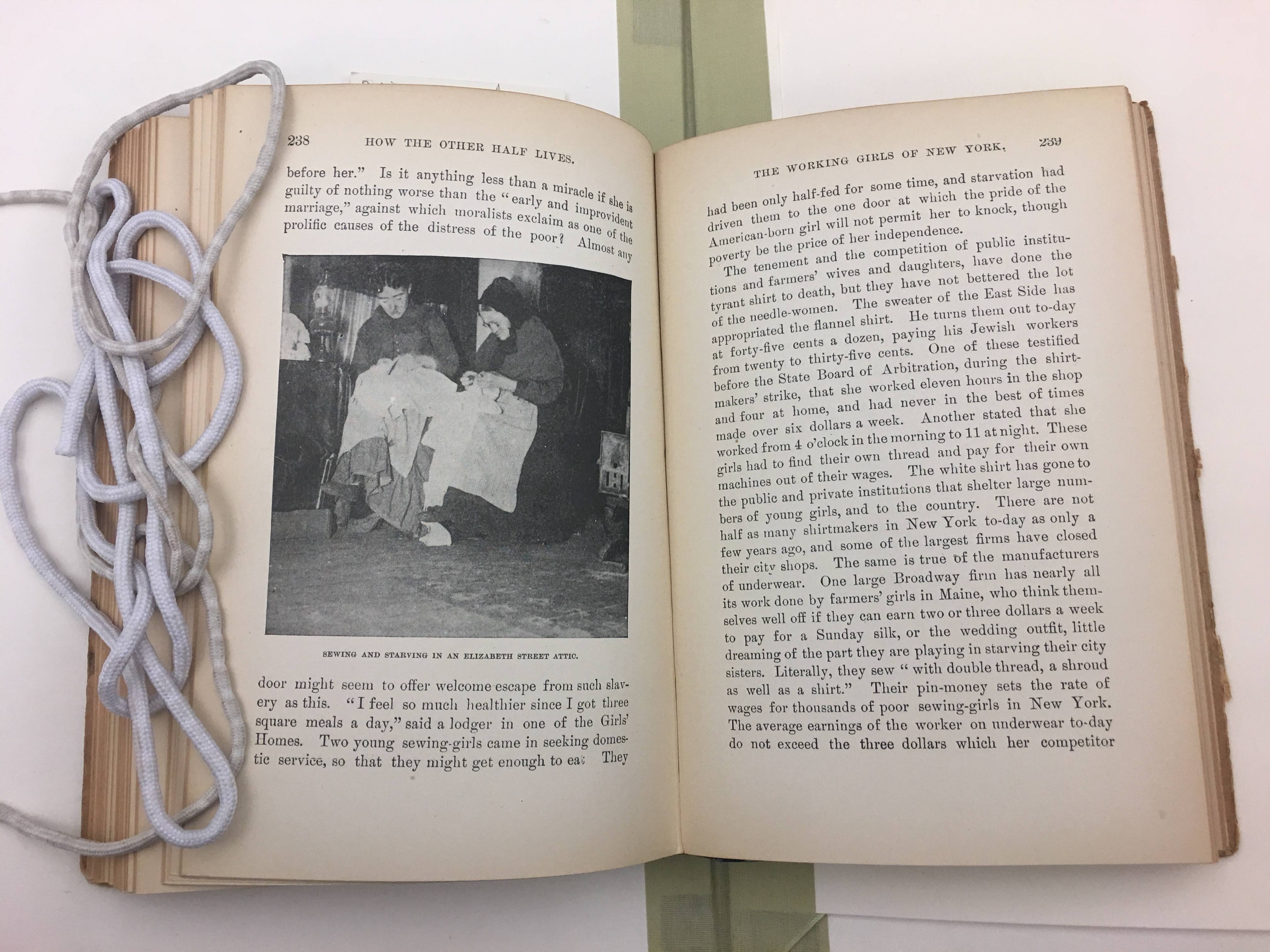 Here, the images in the book are not cartoonish drawings or spiritual portraits. Instead, Riis’ black-and-white photographs are gritty and real, unabashed and undoctored, printed here just as one would have seen in life. The photo in this spread even breaks the text, interrupting the prose, inserted as evidence of the horrors which could not be fully expressed in writing. These raw images add power to the words, and, as in the Gospels and the Dicken’s piece, set the visual tone of the book. But How the Other Half Lives represents a change not only in printing practices and the advent of photography, but shows a new readership, one with an eager appetite for reality. Bonnie Mak writes:

“Illustrations can refer to the world beyond the page and participate in a wider conversation about the book that involves the social status of the particular codex, its designers, and its owners.” (10)

Images helped transform codices into capsules, portals, and tools for social change. They granted illiterate audiences the access to knowledge previously unavailable to them, and they helped fostered rich conversations between text and reality.